This time of year is typically the kick-off for parent tours, or those looking for fall enrollment. One of the many things I enjoy most while guiding new parents through our hallways is the opportunity to show off the works in our classroom. If they come at the right time, they even get to witness the beauty of a Montessori work cycle in motion. The families seem to be amazed at the pure quality of the Montessori materials, and how everything in the classroom is…real.

Montessori classrooms are beautiful. They resemble tiny living communities for the children, complete with authentic, real materials. It’s common for Montessori classrooms to have wood shelves, filled with wooden works. Porcelain pitchers in the practical life area. Glass cups and plates in the kitchen, and glass vases for flower arranging. The use of real materials shows the child that we respect their work; we want them to have “real life” experiences. We want them to learn to handle the materials with care, and to carry their bodies in a cautious manner.

Each material was designed by Dr. Maria Montessori with a specific goal in mind, brought forth by observing the children, as they experimented with the works. She was a scientist, and spent many years creating, manipulating, and revising her works according to what worked best for the children. She understood human development, and developed a pedagogy based on just that. Montessori materials allow for the child to work independently and spontaneously, bringing forth a subconscious love of learning.

Children have a desire to explore; to manipulate objects into whatever their mind desires. For our young, primary students, we do not use computers in the classroom. According to Paula Polk Lillard, “It appears that children six to nine years old develop best when their hands are more directly involved with manipulating materials in their work. It is essential during this period that the children learn to think clearly and read and write in an organized manner. Computers are therefore not included in the prepared environment for use in research studies and creative writing until the upper elementary level.” (Montessori Today) END_OF_DOCUMENT_TOKEN_TO_BE_REPLACED

“[It] may be said that in order to develop the imagination it is necessary for everyone first of all to put himself in contact with reality.” -Dr. Maria Montessori

I have found myself wondering on occasion if such a scenario could still take place. Surely contemporary battery-powered toys with flashing lights and a different song for every button would attract attention away from our simple, orderly materials. But I have seen that it is not so.

A year or so ago, my school hosted a fundraising garage sale. We filled part of a classroom not being used for the summer with donations. We had all kinds of things – plastic play kitchen sets, a cat-shaped keyboard, toy cars, dolls, a bin of dress-up clothes, bikes, and the list goes on. The other half of the classroom still had Montessori materials neatly arranged on shelves.

I watched as a two-and-a-half year old girl walked into the room, looked at all the toys, even touching some of them, and went straight to the shelves of materials and took great delight in working with a cylinder block (one of the Montessori sensorial materials). She was not prompted in any way, nor did I put her in the room as a test or experiment. She was not a student at our school returning to the familiar joys of the classroom. She was a child entering into a room filled with choices and after seeing what was available, she chose what she wanted (or needed) most.

Often in Montessori, we speak of the materials calling out to the children, and we do our best to make sure that call is clear. That is why our classrooms tend to be simple and uncluttered, decorated to the point of orderly beauty, not to the point of distraction. The children want to engage in the classroom. They want the experience that the materials will give them because they will get more learning from that experience than from flashy toys or reasoned rhetoric from an adult.

I think this story supports several truths about children, but the thought I want to land on today is that children crave reality. They want to do real work with real things. Nearly every parent of a two or three-year-old child sympathizes with the image of sweeping the floor and having to drag the child along on the end of the broom. The children want to help, they want to understand their own power to do work, and they will be best satisfied in that quest when they have real things to do.

Paul Gutting has been the Executive Director at Campbell Montessori School since 2011.  Prior to that, he served as Campbell’s Associate Director for two years.  His career in education began in 1992 when he started as an assistant at Campbell, and he has worked in both public and private schools since that time. Paul has served as assistant, teacher, drama specialist, and administrator including service as Dean of Academic Affairs at The Fulton School at St. Albans.  As a child he attended a Montessori school run by his mother, Miriam Gutting.  He is a graduate of Truman State University (B.A. English/Theatre 1999), Washington University (A.M. Drama 2004), and the AMI Orientation Programme to Adolescent Studies (2011).  Paul and his wife, Heather, have three children eight and under, all of whom attend Campbell Montessori School. 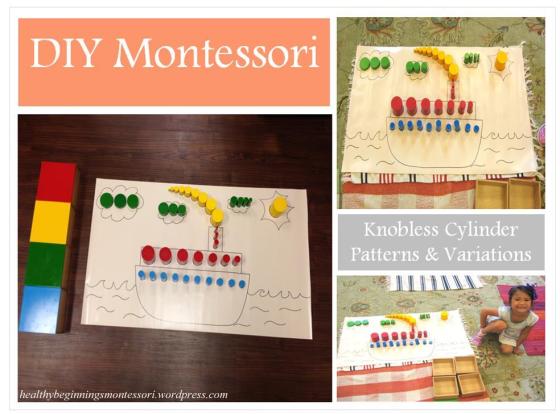 Making your own Montessori materials can be lots of fun, and so rewarding. The key item when making any new work is to find what is needed in your classroom, and add lesson opportunities according to those needs. Try adding seasonal variations to an already-established work on the shelf, such as snowflake pin pricking during winter, or hand-made nomenclature cards for specific holidays. These exciting new work extensions help keep the spirit of learning lively and spontaneous.

To make your own pattern, you’ll need:

Start by deciding what pattern you’d like to make. Get creative! You can make a train, boat, or even incorporate the cylinders into natural scenery, as long as the child is able to grade the objects, just as they would off of the pattern. Once your pattern is made, use a pencil and trace around the cylinders to replicate the different sizes, starting from largest to smallest, left to right. Using a pencil helps preserve the cylinder’s paint, and not leave behind scratches or marks. Re-trace over the pencil with a permanent marker.

Optional: It might be helpful to draw an additional, colored line around the circles to indicate which color cylinder goes where. For instance, I re-traced the boat’s windows in blue to indicate that the blue cylinders were to be placed there. I did not fill in the circles with the color blue, but rather a thin blue line to highlight that specific circle.

Have fun, get creative, and use your imagination!

“The environment must be rich in motives which lend interest to activity and invite the child to conduct his own experiences.” – Dr. Maria Montessori